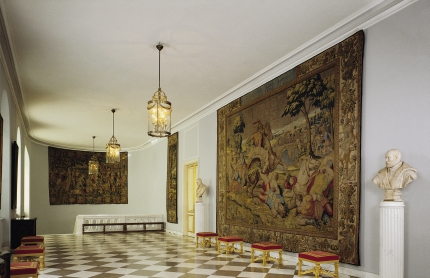 The Oval Gallery used to act as a passageway to the royal gallery in St. John's Collegiate Church. When the Gallery was reconstructed it was completely refurbished with valuable furnishings: Brussels tapestries dating from the middle of the sixteenth century and portraits of Polish monarchs dating from the turn of the seventeenth century. 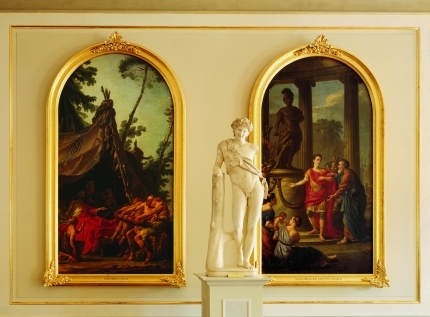 The Antechamber to the Great Hall, the so-called Great Antechamber
It served as the first antechamber where lower-ranking courtiers assembled during audiences with the king.
In the photo: The Great Antechamber paintings by Noël Hallé, Scyrylus, the King of Scythia Urging His Sons to Reconcile and Joseph Marie Vien, Caesar in Front of the Statue of Alexander the Great, 1767. 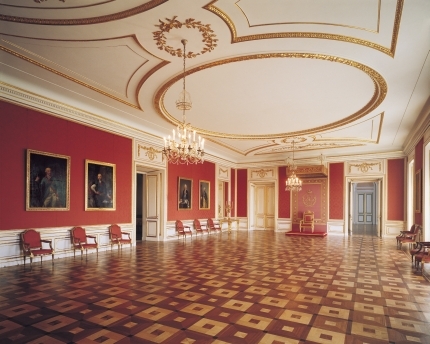 The Council Chamber was rebuilt according to its original design dating to 1784. During the reign of King Stanislaus Augustus it was where the sessions of the Permanent Council were held; the first permanent Polish government, composed of the King (hence the throne), eighteen senators and eighteen deputies. The portraits hanging on the walls, painted by Józef Peszka, depict outstanding personalities of the Four Years' Sejm (1788 - 1792), including Ignacy Zakrzewski (the President of Warsaw), Stanisław Małachowski (Marshal of the Sejm) and Hugo Kołłątaj. 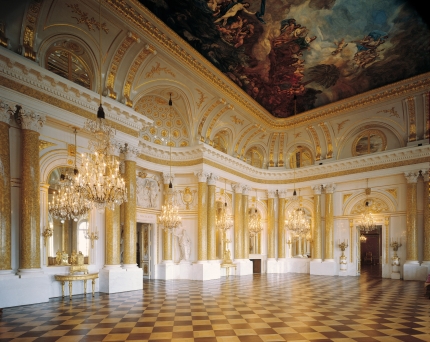 The Great Assembly Hall
During the reign of Stanislaus Augustus this room was used for state ceremonies. The courtiers met in this room, and it was here that banquets, balls and concerts were held and theatrical performances staged.
The room was decorated and furnished in the years 1777-81 according to a design by the architects Domenico Merlini and Jan Christian Kamsetzer. The statues of Apollo and Minerva and the allegories of Justice and Peace, located on either side of a medallion with a portrait of Stanislaus Augustus, were the work of the sculptors André Le Brun and Jacopo Monaldi. The huge ceiling depicts the Disentanglement of Chaos. The Hall was reconstructed in strict accordance with a pre-1939 design, making use of salvaged fragments of the stucco work. The new ceiling was reconstructed by Łucja and Józef Oźmin. 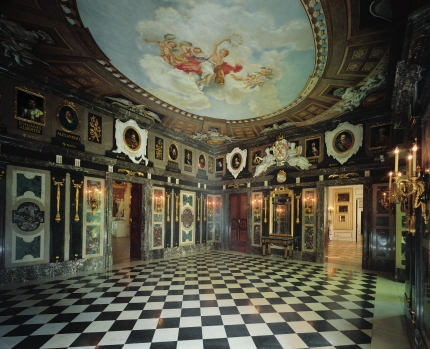 The Marble Room functioned as the second vestibule in the state apartment and is the oldest interior in that apartment. It was furnished from 1640-42, during the reign of Ladislaus IV, according to a design by Giovanni Battista Gisleni and it was renovated by Jakub Fontana in the years 1769-71. Fontana did not make any changes to the basic elements of the original architectural design; he added twenty-two portraits of Polish kings, a ceiling painting by Marcello Bacciarelli and André Le Brun's statue of Justice and Peace over the mirror. 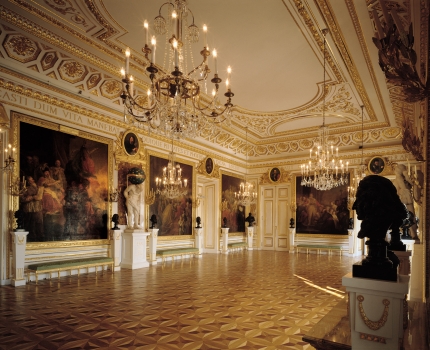 The Knights' Hall
The Knights' Hall was conceived based on an idea of King Stanislaus Augustus. His intention was to create a room in which he could pay tribute to people who had served the country, and focus attention on the most important moments of Polish history. The conception was brought to fruition in the years 1781-86 by the royal architects Domenico Merlini and Jan Christian Kamsetzer, the artist Marcello Bacciarelli and the sculptors André Le Brun and Giacomo Monaldi. Ten oval portraits and twenty-two bronze bust sculptures depicting famous Poles picked out by the King decorate the room. A quotation from Book VII of the Aeneid regarding the merits of outstanding citizens runs along the top of the walls around the room. Statues of Fame and Chronos are located on either side of the central part of the room. 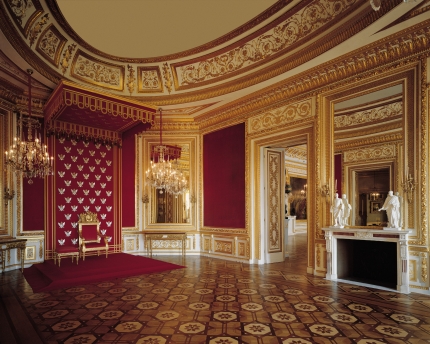 The Throne Room
The Throne Room was designed by almost the entire team of royal artists. The most important contributions were by Domenico Merlini, Jan Christian Kamsetzer and Jan Bogumił Plersch. When arranging the layout of the room, use was made of panelling designed by Victor Louis that was made in Paris, and two marble fireplaces made in Rome. Two beautiful console tables with mosaic tops and four statues of ancient statesmen and military commanders by Angelo Pucinelli are worthy of particular attention.

Hundreds of fragments of the original panelling and stucco work were used to reconstruct the interiors exactly as they had looked before 1939. The embroidered silver eagles which were recreated to decorate the backdrop of the throne are the most important symbolic element in the room. 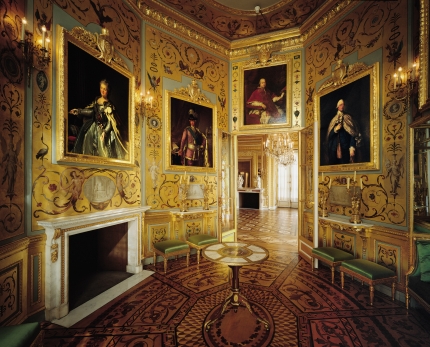 Portraits of six monarchs  who reigned contemporaneously with Stanislaus Augustus hang on the walls. The interiors were designed at the end of the 1760s by Jakub Fontana. Stanislaus Augustus carefully devised the painted decoration.
The Oval Gallery - the Antechamber to the Great Assembly Hall - the Council Chamber - the Great Assembly Hall - the Marble Room - the Knight's Hall - the Throne Room - the Conference Room